Ballot initiatives don’t receive much reporting outside of the state where they happen. Yet these November 3rd asks of voters in seven states (six at the local level) are worthy of understanding and celebrating.

In Multnomah County, Oregon; Colorado; San Antonio, Texas; St. Louis, Missouri; San Joaquin County, California; Leon and Escambia counties in Florida; and Cincinnati, Ohio, voters approved new or increased spending on children’s early care and learning programs. Various financing mechanisms will be used – from income tax increases on high-wage earners, to a tax on nicotine products and marijuana sales, to other increases in sales tax and property tax. Each mechanism to raise revenue has strengths and weaknesses – some progressive and some regressive – what’s most important is that a transformation is under way. The Children’s Funding Project estimates revenue for young children generated from these initiatives total $500 million/year.

The ballot initiatives all won by strong margins. They will fund preschool, increasing wages for early childhood teachers, infant care, literacy and after school programs, and cradle to career services. Several aspire to universal preschool, and two were renewals of previously passed measures. We have counted at least 50 local ballot initiatives to fund children’s programs dating back to the 1980’s that have passed and less than a dozen that have failed. We’ve mapped many of them here.

Read the roundup about the recent victories below. Here’s a map from the Children’s Funding project to share.

• Multnomah County, Oregon: Voters approved an income tax increase on high earners to fund universal, tuition-free preschool for all 3- and 4-year-old children by 2030. The tax will generate an estimated $133 million next year (and $202 million annually by 2026). Funds will add 7,000 new slots by fall 2026 with fair wages for providers and high-quality, culturally responsive opportunities that meet children’s needs. The New York Times reported the wages will be equal to those of kindergarten teachers.

• Colorado: Voters approved a tax on nicotine products that will raise $87 million in 2021 (projected to increase to $276 million by 2028). The revenue will fund rural schools, state health and housing programs, the education budget for the first two years, and universal preschool for potentially more than 75% of the state’s 4-year-olds starting in 2023.

• San Antonio, Texas – Renewal: A measure originally passed in 2012 was renewed last week. It will keep a 1/8 cent local sales tax in place to support the city’s pre-K program, Pre-K 4 SA. The high-quality program serves 2,000 4-year-olds at no cost to parents each year. You can read our updated case study here.

• St. Louis, Missouri: Voters passed a measure to implement a six-cent property tax that will raise $2.3 million a year for early childhood services for infants to 5-year-olds. Learn more about the initiative here.

• Cincinnati, Ohio – Renewal: Voters renewed a 73-cent property tax, originally passed in 2016, to raise $48 million over five years for the public school system. Thirty percent of the revenue will fund the Cincinnati Preschool Promise, which has served 5,000 3-and 4-year-olds in the last four years. You can read our updated case study here.

• Escambia and Leon counties, Florida: These counties joined 10 others in Florida that have dedicated property tax revenue for Children’s Services Councils to fund cradle-to-career services.

For several years, we have seen national and statewide polls showing strong support and building momentum for expanding early learning programs for young children. In North Carolina, in 2014, 2016 and 2018, NCECF and the bipartisan polling team of Public Opinion Strategies and Hart Research, found that support for early childhood investments in our state. 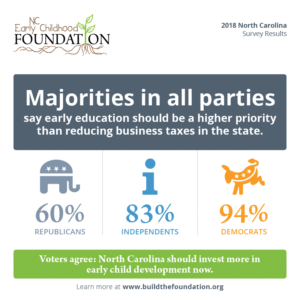 • Eighty percent of North Carolina voters said early education should be a higher priority than reducing business taxes in the state. Majorities across all parties agree, including 60 percent of Republicans, 83 percent of Independents, and 94 percent of Democrats.

The NCECF website Local Funding for Early Learning: A Community Toolkit details funding mechanisms available to local communities in North Carolina, case studies from our state (Mecklenburg and Wake counties) and across the country as well as tools to prepare for a funding initiative. Is your community ready?

Thanks to the Children’s Funding project for cataloguing the proposals last month to make it easy for the rest of us to keep track! And a special thank you to Alexandra Sirota at the NC Budget and Tax Center for keeping this issue front and center as communities consider these opportunities for the future.